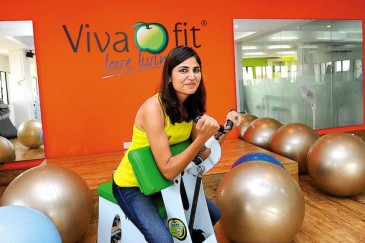 Manisha Ahlawat, Managing Director of Vivafit, India hails from Meerut, Uttar Pradesh and has been a fitness enthusiast and a firm believer of maintaining good health and nutrition, especially among women.

Manisha was brought up in cities all over India and completed her Bachelor’s degree in Science from Meerut. She moved to the USA in the mid-nineties and was exposed to a completely different culture compared to the small town of India she was raised in. She was inspired to study further and completed her MBA from Georgia State University, Atlanta. During her MBA and her 9-year stay in Atlanta, she would compare the lives of women back home with the much better lives of American women. And two things that made all the difference were education and health. She started encouraging women to invest in their higher studies and also in their health. Health and fitness for women was a very strange idea back then.

After moving back to New Delhi, India in 2004, she settled for a job that allowed her to raise her two kids also at the same time. She continued to gain valuable retail and services business experience by working with seasoned brands from the industry like Mahindra Retail, Reliance Retail, and Crossword Bookstores.

And when in 2010, she was finally ready for the entrepreneurial plunge, she opted for Vivafit, a European chain of women-only fitness centers. After spending a few years living in Delhi, she had identified a need for a safe, hygienic and affordable fitness center for women of all age groups. Vivafit came across as an opportunity to plug this huge gap. As if to validate her idea of creating more women-only spaces, Delhi Metro started its women-only coach the same year!

Manisha realized the potential of a chain of women’s only fitness centers in India, which will offer world-class service in a state of the art setting. The centers will serve as a lifestyle platform that is ‘of the women, by the women, and for the women.’ She signed a master franchise agreement with Vivafit, a Portuguese brand, and currently manages the North India operations which have two centers; one in Gurgaon, and one in Delhi.

Manisha firmly believes that women should not neglect their health and should focus more on fitness. At Vivafit, Manisha combines her love for women’s issues, feminism, fitness, and health to nurture women who are trying to achieve their life goals. She also volunteers with Delhi Anganwadi centers to contribute further to the cause of women’s health and nutrition. She loves to read in her leisure time and her quest for learning is never-ending.