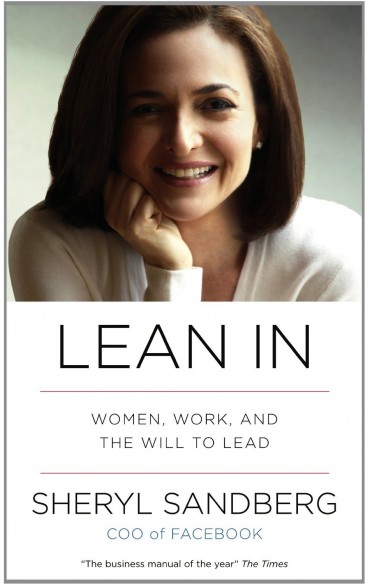 LEAN IN – A Woman Can Relate and A Man Can Understand

Using stories from her own life and carefully researched data, Sheryl Sandberg, The COO of Facebook has emerged as an icon with her book LEAN IN – “Women, Work and Will to Lead”. It’s a manual for today’s young working women who are trying hard to follow their career goals as well as manage their ever-demanding personal lives.

But the question is, who is a woman according to our society, women are struggling to create an identity away from home and there is confusion.

Sheryl said- A woman is one who internalizes the negative messages that say it’s wrong to be outspoken, aggressive, and more powerful than men. A woman is one who lowers her own expectations of what she can achieve and continue to do the majority of household tasks and child care. A woman is one who compromises her own career goals to make room for her partner (and their aims and ambitions) and children who may not even exist yet.

Women are the world’s most underused resource.

The laws of economics and gender studies tell us that if we tap the entire pool of human resources and talent, our collective performance would improve. The world is hungry for talent. Talent can’t be differentiated by gender. If one out of every three women come and use their talent in their respective fields, then we will see the change all around the world.

A 2011 Mckinsey’s report noted that men are promoted based on potential, while women are based on their past accomplishments. Sheryl also stresses in her book that women face very real obstacles in the professional world, be it the matter of mentoring or being sponsored by co-workers.

When I see girls around me, my female friends, colleagues or relatives, all are facing similar kind of situations in their lives. I too am one of them. Our readiness to sacrifice our careers, our ambitions and our dreams are fuelled mainly by the inevitability of accepting of marriage and children as an indispensable fact of our lives. Even if a few of us continue with our careers after marriage, the priority still flips over after having children. We are asked to leave our own dreams to fulfil that of our family’s. Only a few of us are able to juggle all these seemingly conflicting roles and ambitions simultaneously. A woman’s life takes a 360 degree (A new start) turn after marriage where compromise becomes a must.

–In many parts of our community, education for girls is still given less importance, since the expectation is that they are unlikely to contribute to the family’s income and will likely be home makers.

Personally, I am scared of the word called “MARRIAGE”. It is a weapon which can kill my dreams at one go. I have interacted with so many young girls and one thing that I found common among all of them is that they carry their aim until marriage. Girls are expected to answer all kinds of questions– such as ’what’s your age?’, ‘What’s your height?’, ‘Do you want to settle down in a nuclear family or joint family?’, ‘Are you open to getting married to a businessman?’ There are ever hardly any queries directed to her career goals, her personal ambitions or her personal dreams. “She is very ambitious” is never a compliment in our culture.

Sheryl described FEAR of a woman – Fear is at the root of barriers face by women. Fear of not being liked, Fear of making the wrong choice, Fear of drawing negative attention, Fear of overreaching, Fear of being judged, Fear of failure and the holy trinity of fear – the fear of being a bad mother, wife, and daughter.

Without fear, women would be empowered to pursue professional success and personal fulfilment and freely choose one or the other, or even both.

In the end, we women are largely responsible for underestimating ourselves. Women often judge their own performance as worse than it actually is. If we want a different outcome, we will have to do something about it. We consistently underestimate ourselves. I follow – “Fake it till you make/feel it” and “Don’t flaunt your success, or even let people know about your success. If you do, people won’t like you.”

If a woman pushes to get the job done, if she’s highly competent, if she focuses on results rather than on pleasing others, she’s acting like a man. And if she acts like a man, people dislike her. So we should follow – We cannot change what we are unaware of, and once we are aware, we cannot help but change.

Mrs. Sandberg simply defines her experience in small sentences that are deeply inspiring -“Don’t leave before you leave” and “Make your partner a real partner”.

When it comes to settling down, find someone who wants an equal partner; someone who thinks women should be smart, opinionated and ambitious; someone who values fairness and wants to do his share at home.