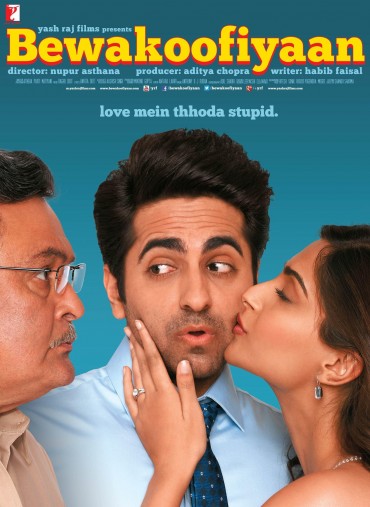 Mohit (Ayushmann Khurrana) and Mayera (Sonam Kapoor) are a young couple coming from a middle class corporate family. Mohit is a marketing whiz while Mayera is a financial advisor for a well-known firm. The duo are highly ambitious and desire to spend their life together loving each other. However, the love story changes into full drama and chaos when Mayera’s father, V.K Sehgal (Rishi Kapoor) enters the plot. He believes that only a rich man can keep Mayera happy all her life and not a senior executive like Mohit. The remaining story is about Mohit and Mayera trying to change the mind of their father.

Relations in today’s generation are highly complicated, especially due to the corporate lifestyle. Living a life only based on Love is not enough to survive. And this is the fact that Mayera’s father believes strictly.

Rishi Kapoor is just fantabulous as always, in his role as a government retired father of a daughter working for a high class private sector firm. Sonam Kapoor, needless to say, looks beautiful and holds her tag as the most stylish actress of today. On the other hand, Ayushmann Khurrana, just 2 films old, also does a great job as Mohit, and creates magic every time he shares the screen with Rishi Kapoor.

The soundtrack of the movie is pretty decent, with Gulcharrey being liked by the audience for its fast music. Bewakoofiyan surely deserves a watch, especially with no more movies being released in the weekend.