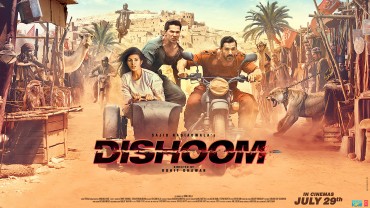 It’s the season of action, after Sultan, Kabali now the carpet is spread long for ‘Dishoom’, an adventurous action added with the punch of comedy is what directed by Rohit Dhawan. A movie that involves stardom, nation’s pride, abduction and a plan to rescue by two Indian cops who goes on a mission 36 hours, and before they hit on their master plan they dance in their briefs – Peach on the Beach.

The complete bromance script, filled with comedy, John Abraham’s’ ( Kabir Shergill) surly attitude and adorable under-boy Varun Dhawan ( Junaid Ansari) and a little role of a drug addict Jacqueline Fernandez (Pakiza/Parvati) is nothing but a cliche and a predictable plot. Green signals and all wows to the negative role and the late but tasteful Akshaye Khanna (Wagah). The story revolves around 2 cops John and Varun rescuing Viraj Sharma (Virat Kohli+Rohit Sharma), who is been abducted days before an important match between India and Pakistan. As a villain, Akshaye is a bookie who wants to taint Indian cricket scores to earn raining money, still against Pakistan. The 36 hours of chase in Middle East by our macho-Cuto duo will take you from Sand bazaars, skyscrapers and Harems and yes the Helicopter scene is one of those must watches.

The eye candy of the film is a cameo of Akshay Kumar in a man-bun. You would also find Nargis Fakhri is killer bikini and Parineeti Chopra in 6 abs just to say us hello. Jacqueline is going to slay us with her unmatchable US marine like skills to assist our cops in their mission. This movie with all predictable plot will still make you clap for its entertainment punch and comedy as an ingredient.

A one time watch is not that bad. We just hope next movie we do not find Varun Dhawan all cutie handsome underdog – remember, Dilwale, Humpty Sharma Ki Dulhania and Main Tera Hero. Well, Badlapur is a feather on his cap. Ok, go for some action entertainment.