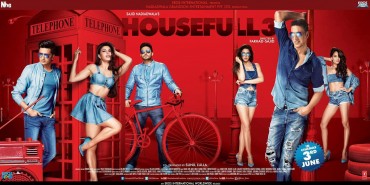 Phew, Finally we welcomed the first sheer comedy movie, the first full entertainment genre of 2016, but is the warm welcome well deserved for ‘Housefull 3’. Directed by Sajid Farhad, and multi starer movie is a pure drama and take an healthy advice, if you are looking for a story, please do not go for it! In this sense, Housefull 3 has fit itself firm in the previous frames of Housefull prequels!

This romantic comedy revolves around three men Akshay Kumar (Sandy), Abhishek bachchan (Bunty), and Riteish Deshmukh (Teddy), who all fell in love with the daughters of Boman Irani (Batook Patel). The Daughters Nargis Fakhri (Sarah Patel), Jacqueline Fernandez (Gracy Patel), Lisa Haydon (Jenny Patel) wears a mask of being ‘So Sanskaari’ which seems the opposite. The entire plot is based on how one after the other, these men tries to convince Batook Patel, that they are most eligible grooms for their daughters, and he do not want them to get married at all (Weird why, no reason explained well).

Not to forget, Housefull series owns the patent ‘Lies and Confusions’ and thus they remain clung to it very well here too.

Talk about the performance and I would say the leading ladies are here only to show their pretty faces and hot bodies – I know, this is not surprising in Bollywood! While the men, Akshay Kumar is the cherry in the pie! We have last seen him in a serious AIRLIFT character and this time he wouldn’t fail to amaze us with his quirky and witty larks. But beware they are not as good as the prequels. With the best buddy of superstar, Riteish Deshmukh – our expectations are always on zenith but guess what, there’s a very less flesh in the character he plays. No comments on Abhishek’s comedy talent – He is learning it from Akshay and Riteish for sure.

Hats off to Boman irani, As usual no doubt on his talent! He is the icing of the cake here in the movie, while the main ingredient is Akshay Kumar. Jacky Shroff, Chuncky Pandey and Jhonny Lever are definitely a treat!

Let’s not talk technical stuff as movie has least to deal with it. Wrapping up all, we recommend this movie only for people who keep their brains at home and watch it only with their ears and funny emotions. Do not find a story/logic! Go for it if you are a die hard fan of Akshay Kumar and Boman Irani comic timings!
Last, not the least it is not a family entertainer as the songs like ‘Tang Uthake’, and the third grade jokes are a part of the movie. Got for it for few gags only!