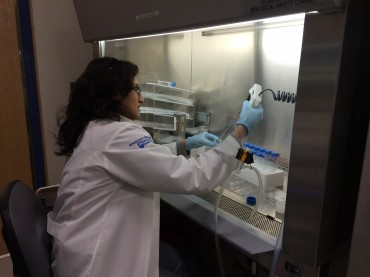 The auditorium was filled to capacity and the captivating voice of the speaker resonated through its walls. “Personalizing Cancer Therapy” was the talk of the day, and the audience listened, mesmerized. I was there too, but my mind kept drifting away to a conversation I had had a few weeks ago with M’s family…

M is a very pleasant teenager who has recurrent osteosarcoma- an aggressive bone cancer. M was diagnosed about two years ago. M’s journey has been a war but he displayed incredible maturity through all of the suffering he encountered. The cancer took away not only precious couple years of his life but also his right leg. An infection of the surgical prosthesis at the site of primary cancer mandated an amputation. M lost his leg, but not his endearing optimism to live life. He battled through nauseating chemotherapy and the pangs of “phantom limb pain” with a constant smile on his face which many times nagged at my own conscience. I do not recall a single instance when M complained. M completed therapy seven months back and was thrilled to be back in school, planning adventures with his friends that only a boy of his spirit could undertake. But then came the surveillance scans. A CT scan of his chest five months ago revealed the possibility that the tumor had spread to his lungs. M remained optimistic while he underwent surgery to remove the offending disease and he hoped it was just a bad fungal infection and so did I. To my dismay, the surgeons found a lot of tumor in his right chest and he lost two-thirds of his right lung. It was heartbreaking to see him in the hospital bed. He was struggling with bodily pain but endured the bad news without as much as a tear. His mother remained by his side, as always. At this stage, we could offer only investigational therapy, which held promise but not much choice or assurance. The window of his hospital room offered a view of autumn in full bloom. His room however, was reminiscent of the leaves in the fall…

The future holds the promise of “Personalized medicine”. Researchers are trying to develop therapies targeting unique aspects of the patient’s cancer with the hope of bettering outcomes. However, the more we know, the complicated it gets. In short, akin to opening up a Pandora’s box. Sometimes it is easy to forget that bettering outcomes matters to patients only when there is a chance for an outcome. When faced with the dilemma of “Do I have days or weeks?” what assumes more significance is that doctors help patients personalize their life, not medicine. While fighting for a cure remains the motto for an oncologist, fighting for life sometimes takes a backseat. Death is imminent and as much as we get caught up in the inevitability of the prognosis, it is essential to recognize that the patients’ self-defined quality of life may differ from others’ expectations. New therapy may reinforce the promise of “surviving”, but it may do so at the cost of “living”.

I continue to fight

I do what everyone does

But where is my life?

I still have weeks

And I will endure

But I will miss the smiles

The tears the hugs

I hope it will be worthwhile

I remember that day when my attending and I met with M’s parents. I felt the walls of that small room closing upon me as we discussed with them the finite realm of options. With a heavy voice and wet eyes they asked whether they should prepone the family vacation that M had planned for the coming spring. Optimism failed us as we confirmed their fears with a polite “probably”.

I saw M in clinic the other day, couple weeks after surgery. He denied having much pain but his eyes could not keep up with the façade that his smile was trying to convey. I calmly laid the odds before him- something that we doctors do in an attempt to drown the pain of reality. “Dr. T, I would like to be able to spend more time at home, and continue doing the things I am able to. Can you help me with the pain?”

I saw him again a week later. The pain medication was working. He excitedly informed me that he was playing a lead part in a school drama and wanted to discuss if we could orchestrate his chemotherapy so as to provide him with a window of “feeling well” to be able to perform. He had planned a sleepover with his friends on the coming weekend and was looking forward to a “Make-a-Wish” cruise in a couple weeks. We looked at the calendar and settled on dates. We ended the visit with “we shall start the next chemotherapy cycle next week”. M smiled. I felt my heart shed a tear.

Money Not An Issue For Child Cancer Treatments Anymore!