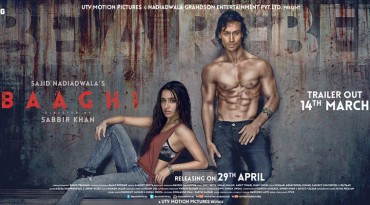 Baaghi : A Rebel For Love

Action, drama, minus emotions, minus story! This is what Baaghi is for me!

Said to be one of 2016’s most awaited films, Baaghi ruins all your hopes from the movie. The only thing the movie is good at, is its action sequence performed skilfully by Tiger Shroff. And yet again, he proves the point that he can break bones with his hands. But what he really fails at is his ability to act and deliver his lines with emotions. All in all, his acting skills are just as rigid as his 6 or 8 pack abs.

A violent romance movie, Baaghi is Tiger’s second film after his first flick Heropanti. And a lot was expected from him which he failed to deliver. Also the storyline has nothing new or interesting about it to keep you entertained through the hours. A damsel in distress, 2 men targeting the same girl, the lucky chirpy cute attitude of the actress, are all the same things we have seen a gazillion times on-screen.

The story is about Sia (shraddha) who loves the rain and has a cute habit of talking to herself all day. On the other hand, there are 2 men who desperately want to make her their own asset. Ronny (Shroff) is a reckless man who lives his life on the edge (A Baaghi) and so, his father sends him to a martial arts school run by his friend, in Kerala.

Shraddha’s acting skills are not used at all and she remains a shadowed character in the film. The movie has more flaws than you can count. In direct words, make a pass and avoid the film, unless you love action and a brainless movie!