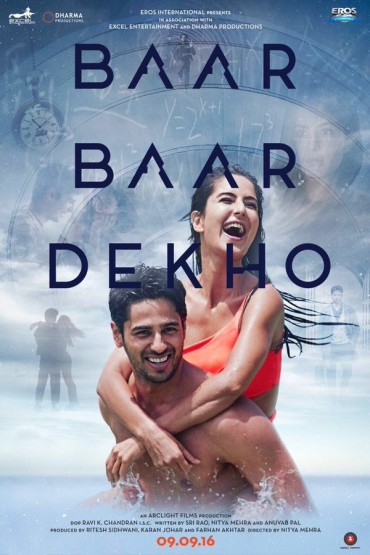 Ever since the release of ‘Kala Chashma’, ‘O Dariya’, and ‘Nachdi Ve Saare’ songs from the much hyped movie of the month ‘Baar Baar Dekho’, we have been excited about how the plot places itself, while its numbers are already on chart busters. With foot tapping soundtrack and one of the hottest pair in lead, the debutant director Nitya Mehra has offered the same dish in the movie menu, with slight variations in the cooking style. Bollywood’s old method of experimenting with Love Stories are not unknown!

Jai (Sidharth Malhotra) and Diya (Katrina Kaif) are in love, where Jai is confused; he wants to enjoy his life but is also reluctant to spare some goody woody time from his busy profession as a Mathematician. While Diya, an artist wants to touch the sky and live in the moments while experiencing everything the life has to offer. Her sole aim while living the perks is to become Mrs. Jai Verma. The sweet little conflicts between these two are interesting but nothing new for audience. What’s new here is the time traveling to future, a modern technical love story and yes Katrina’s toned body and abs!!

Just a day before the wedding, one small mistake of Jai, changes the happy life and also the destiny of movie. How a time travel leaps to 30 years from today to the future makes an interesting connect, where he is able to see his honeymoon, his wife’s delivery in London and his post -retirement days. Some of the changes in there are too cheesy and also second half of the movie, where both of them could be seen as old couple shows the work-life balance, something that makes us guess and think.

With Co-stars Ram Kapoor, Sayani Gupta, Sarika and acting debutant Rohan Joshi, delivers a stellar performance, the soundtrack and music is worth an applaud. Adding more to it is Lavish locations as sets makes it a good frame in the flick. However, summing up all Sidharth isn’t any glowing bulb here nor is Katrina with her over-the-top acting in the second half.