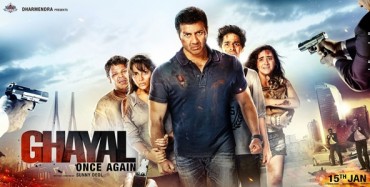 Ok, I agree Ghayal was a big time hit when released in the year 1990 and people loved the film and waited eagerly for the sequence to come. However, after 26 years, Sunny Deol brings back the much awaited sequence of the film. The actor turned director, Sunny Deol promised the same punches and aggression in the film as the original. But now that the film has been released, it has received mixed reviews from the audience. Some have loved it… while some thought the film as a waste.

Getting to the story, it begins right from the same plot where the previous part ended. The story revolves around the same two characters, Ajay Mehra (Sunny) and Joe D’Souza (Puri). After coming out of Jail, Ajay determines himself to fight against corruption (the same old storyline where innocent are suppressed by the villains abusing the Hero’s sister). What The writer fails to understand here is that the story which worked in the 1990’s in the old generation, Will Not Work this time, where women are independent, empowered and strong minded.

Overall, the movie has well choreographed action sequences, background music and cinematography. Every actor, including the supporting roles featuring Om Puri, Soha Ali khan, Tisca Chopra, Manoj Joshi, Aanchal Munjal, and others did a great job in the film. What the film lacks is a good storyline.

So, if you really like Sunny Deol and his Action, then go ahead and watch it Else the film can be avoided. You won’t miss out much!