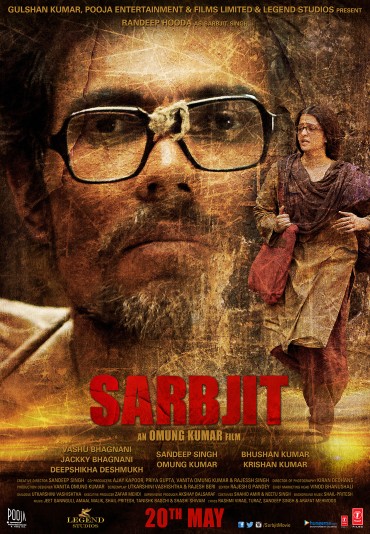 We haven’t forgotten Priyanka Chopra Starrer Biopic Mary Kom, and the amalgamation of reviews it got for it’s beauty of letting the hero out in public added with not so necessary dragging of scenes, spiced with drama. With the previous little setback director Omung Kumar has given fresh and tasty slice to Sarbjit but the setback still persists.

Based on a true story of an Indian farmer Sarbjit Singh who accidentally enters Pakistan borders and was accused for being a spy and a terrorist. The movie is about the fight of a sister who leaves no stone unturned to bring her innocent brother back to India and it’s about that 23 years wrapped on screen for three hours. Sarbjit’s life is a painful tale that every Indian should know, we thank director for bringing it to the mass but disappointed at the same time for not making it a masterpiece.

Directors well intentioned success is dragged down on account of poor screenplay, editing skills which fails to give justice to the 23 years of torture of an innocent man, anguish of the family and his sister’s never ending plight to get her brother back!

The Aishwarya Rai Bachchan, Randeep Hooda, Richa Chadda starrer had raised everyone’s expectations yet has landed the same to grounds. Provided the director had used his scissors on melodrama, bombastic dialogues, and Aishwarya’s trademark screaming (The one we also watched in Jazbaa) the movie would have been in top 10 platter. Randeep Hooda, as expected fulfills the created expectation of people by giving a soul striking performance as a man who lost 3 decades in a Pakistani Jail. But here the real hero is Dalbir( Aishwarya) who tries taking serious roles in the kity but not even close to any sardarni. Richa Chadda given only 2-3 scenes gives justice to the role. Just like every biopic is blamed for altering the real story by director’s imagination, Sarbjit doesn’t remain unaltered too!

This is another biopic post Neerja, which had a painful end and had left us teary eyes at the climax, will Sarbjit do that magic and ignite the same pain in Indians, remains a question! There’s one thing, just the thing attracts here is Randeep Hooda’s fierce performance! So go for him, not for the movie!