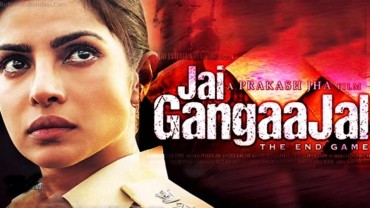 With Women’s day right around the corner, Director Prakash Jha brings a movie which talks all about Women strength and bravery! Jai Gangaajal is the story of a fearless police officer and how she works against the corrupt politicians. The movie brings out a series of issues, showing frustrated civilians, the poor debt ridden farms and corporate greed. However, the story has no particular direction which makes it a little chaotic.

The story of the film is very much the same as its prequel, it is just that this time, it is not Ajay Devgan fighting corruption, but Priyanka Chopra who fights mightily against a dirty and corrupt politician. Priyanka puts all her effort to portray her role to perfection. She throws punches and fights goons in this police drama with all her strength.

The movie also has the director playing a small role. Prakash Jha plays the role of a rogue cop which however, doesn’t suit him well. He lacks skills and the charisma on the screen. Overall, the movie  could have been made better with a proper storyline. Watch the film only if you are an ardent Priyanka fan, else drop it!