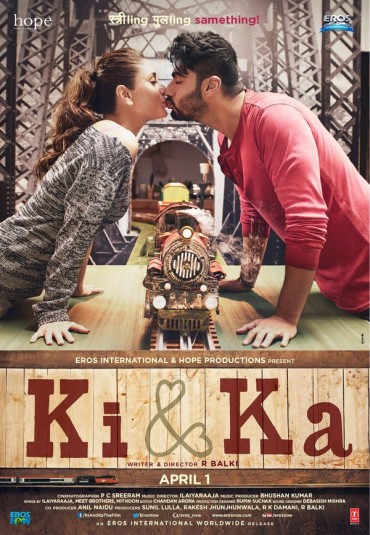 Dhara Vakharia
Freelance Writer, Women Planet
Food is one of the only things that indulges all your senses. The rich colour of saffron, the texture of a cheese cake, the crackle or fresh bread, all of them are simply addictive. I am a food addict and love to explore food beyond the traditional!

Stereotypes – a very good tool to target your product users” – but that just doesn’t work in real life. That is the primary focus of this fun and easy going film. It is about a woman who is career oriented and has ambitions to achieve great heights professionally (and very specifically, not to prove a point to the “zaalim duniya” but for her ownself). On the other hand is a man who thinks, and I personally feel so too, that a homemaker is an “artist” and aims to be really good at doing just that. They make a perfect match, get married and choose a life less explored.

R. Balki, with his very interesting easy-story telling, explores the subject and beyond. The film is fun-filled and smooth – especially the first half. Although, where the road gets a little rocky is the multiple issue the film maker is trying to address and probably the only reason the movie does not come across so impactful. From breaking social stereotypes, the movie gradually shifts to the friction that is often created between the home maker and the bread-winner of the house. This shift touches a lot of different notes (and mostly very accurate too) but in my opinion, gets too much for the film.

Nevertheless, the film is an interesting watch. Easy going, as I mentioned, and rich in concept. Leaves you with a lot to think about but doesn’t get your head heavy. Both the lead actors look just perfect. Kareena as Ki looks dynamic and ambitious and finally (and thankfully) has a substantial role to play. Arjun Kapoor, with his great build, gives just the right amount of contrast to what he aims to be. Hats off to him for being so experimental and equally bold to pick up a role such as this and play it with ease.

Ki & Ka will make a really good film for the weekend for all those who would look for entertainment with content. A few glitches, but the film is absolutely worth a watch.