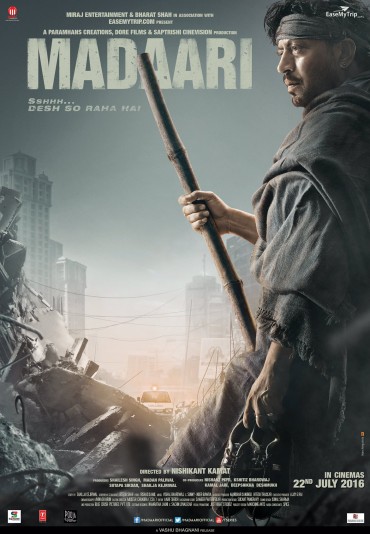 And the most awaited week has arrived with two great actors bringing up their sweat and time enrolled in their own charm at the big screens. With Rajinikanth’s ‘Kabbali’ and Irrfan Khan’s ‘Madaari’, it has become a hard shell to crack for the audience to decide upon their first choices. With Irfan being the master of his indisputable acting skills and thought provoking roles, backed with no Bollywood surname, The Three Khans or Kapoors, is a real superstar in his own skin.

After his power pack stagecraft in ‘Jurassic World’ and ‘Piku’, this ‘Jazbaa’ actor has matched his expectation graph that he raised above with his every new release and now with the new social thriller ‘Madaari’. Directed by Nishikant Kamat who has given us ‘Rocky Handsome’, ‘Force’, and ‘Drishyam’ will make you glued to your chairs with its intriguing yet not so convincing script; however thanks to Irrfan Khan for igniting the spark in an unhurried plot, the much required pull to lift a movie that is no entertainment or a punching bag reel but a social thriller which will drag the nation to think and think.

A happy middle class man Nirmal Kumar (Irrfan Khan) who faced a tragedy one unlucky day, seeks governments help who as usual first delays it and shows least sympathy. To incur his loss and to show how it feels like, Kumar decides to teach a moral lesson to entire system that brings the powerful leaders of the nation on his knee. A common man kidnapping a leader’s son, the bond between Nirmal and Rohan (Vishesh Bansal), the kid who is abducted throws a poignancy. Not to forget the emotional message enacted upon, just through Irrfan’s eyes backed with the powerful music by Vishal Bhardwaj would force you to bite your nails.

The editing, screenplay, music and acting lifts the glow of the movie, the only that hits it back is its unhurried pace which is no doubt taken a bit care by Khan. If you are looking for some item song to drool over, or to whistle over some stunts, this is not your cake. This movie is solely for intellectuals who at coffee table discuss the nation bitten by corruption, the politics drama and a father-son relation.

From us, it’s yet again Irrfan Khan and a soft yet powerful intriguing social drama that you would love to watch but we warned you for it not so an exciting and predictable story.