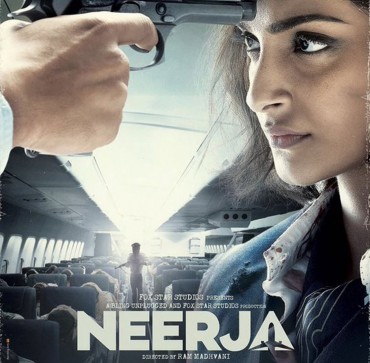 Ever since I had watched the Trailer of Neerja, watching this film was surely on top of my movie review lists! I have waited patiently and now that I have seen it, I am left speechless and tear eyed!

Neerja is a very intense film, a movie based on flight attendant Neerja Bhanot, aged just 22, who was killed by terrorists while saving 300 passengers aboard the Pan Am Flight 73. And trust me, every single person in the audience left the theater with a sad face. This was how the movie affected its viewers.

Sonam Kapoor, the damsel and the Fashion diva of Bollywood has chosen the right film and with it she will be known as an actress rather than a glam doll. Her acting is flawless and she very cautiously keeps you enticed to the film until its very end. Her performance is surely the best compared to her previous flicks and may get her nominated for a National Award as well. The supporting cast including of Shabana Azmi and Shekhar Ravjiani keep you enthralled with their power packed performances.

The movie has the perfect story, good screenplay, cinematography and performances. However, there are a few flaws in the film which get shadowed by its overall outcome. It has been highly appreciated by the critics and now by the audience. So this weekend, book your tickets and buckle up your seats to watch Neerja, the story of a fearless Indian girl! It is one movie, you need to watch!