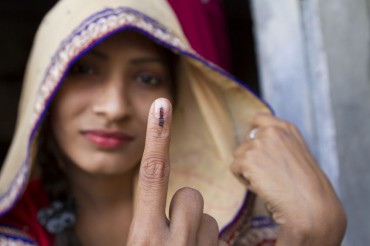 RJ Janavi
Guest Writer , Women Planet
RJ by heart and profession, RJ Janavi is one of the most loved RJs of Radiocity! A Women empowerer, she believes in voicing her thoughts and expressions on important issues, making people aware of their responsibilities.

Women are often called the ‘Home ministers’ of their families. We are multitasking champions who spend most of our waking hours tending to the needs of our family and loved ones. We have big shoes to fill and tread a road which is suited for an obstacle race.

It is no surprise then that women often fail to prioritize ourselves. And I am not just talking about putting ones happiness on top, but even things like exercising one’s franchise. In the everyday rigmarole of cooking, cleaning, working and more, many women do not realize the importance of fulfilling this particular duty and exercising this right. Data shows an imbalance in the male and female voter ratio in most states. From “I have the kitchen and office to manage,” to “What will my one vote do?”, women often give up on their precious vote.

For years, women have had to fight for various rights. From taking to the streets to burning bras, we have fought many battles. And yet, we often fail on maxing the rights that we already have. This is the biggest celebration of Democracy in the world and we are entitled to our vote. Women’s empowerment doesn’t necessarily have to be about conquering new forts. It is also about using what we have to the fullest. No matter what, this 23 of April, do make sure you make the time to step out and vote.

We are often worried about the future, thinking about what it will hold for our children. From small investments to other gestures, we step up to secure a future for them. Here is our chance to participate in building a future for them. Every vote counts. Historically speaking, even marginal votes have created uproar in the government. In fact, I urge you to not just vote but vote in an empowered manner. Learn about the contestants, read the manifestos, understand their track records and what they have to offer and then cast your vote.

It is not called the biggest festival of democracy as a rhetoric. Over 1 million polling booths are set up in the country with over 11 million Government employs deployed for this exercise. The 2014 election cost us over 5 Billion dollars and the present one will definitely cost us more. Make your vote count! Help others around you who cannot go to the booths on their own. Be more than just the Home minister.