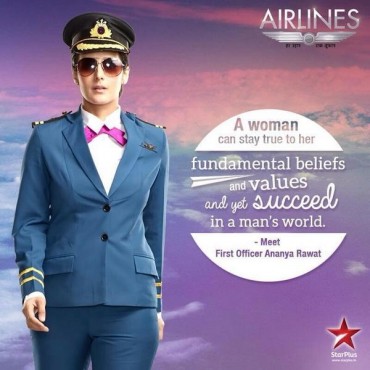 Airlines – Giving Wings to the Dreams of all Women

At a time when the world’s aviation industry has experienced a few setbacks with missing planes and air crashes, Star Plus decides to give its viewers an interesting soap opera with, “Airlines – Har Udaan ek Toofan”! The serial, based on the lives of commercial pilots is neatly woven around two characters, Yudi (playing the male lead) and Tulip Joshi (Playing the Female lead role of Anany Rawat).

The soap is particularly more special, as it is directed towards Womanism, trying to show the world how an ambitious woman, aspiring to be a successful commercial pilot, steps into a world dominated by men. Ananya Rawat (played by Tulip Joshi) is a determined girl dreaming about a successful career as a commercial pilot, rather than being a beautifully dressed air hostess. She fights all odds with her strong will and traditional values to achieve her dream and do whatever it takes to secure the lives of her on-board passengers.

Talking about her character in the serial, Tulip said to Women Planet that,

“Airlines is the story of a girl Ananya Rawat, her journey in life from the time she becomes a first officer. The story talks a bit about the airline industry. It focuses on her relationship with her family members, her fellow colleagues, her challenges and excitement with people in her life and her job. There is action, drama, glamour and thrill.”

According to reports, Tulip had a fatal injury while shooting for the soap. But there were no grave repercussions from the injury and she resumed back to her shoots soon. This makes the serial more interesting to watch. The show will be aired from the 24th Aug.

Best of Luck to the team of Airlines!