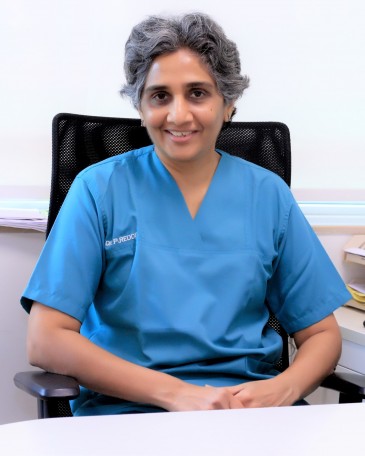 Dr. Reddy has trained and worked in very busy tertiary referral hospitals in the UK for ten years.  She has vast experience in dealing with complicated ObGyn cases associated with severe heart disease, kidney disease, neurological problems and metabolic disorders requiring multidisciplinary inputs.  After coming back to Bangalore, she has been working in some of the busiest Multi Specialty ObGyn units in the city till she joined La Femme as its Director and Senior Consultant – ObGyn in August 2015.

She was the first Consultant in Bangalore to introduce the concept of evidence based, protocol led management of patients in keeping with international standards.  This has contributed immensely to the reduction of caesarean section rates, setting standards and improving patient care.She has a very high rate of normal deliveries and encourages vaginal birth after caesarean sections.

She has authored a Labour Ward Manualwhich helps doctors and nurses to deliver uniform care to all laboring women.  This also helps to enhance the knowledge of her colleagues and promote evidence based care

She specializes in High Risk Obstetrics and is the lead for tertiary referrals of Complicated Pregnancies.  She is well known for her sound knowledge and balanced evidence based decisions and sees a lot of patients referred for second and third opinions.

Dr Reddy has special training and experience in complicated vaginal surgeries in addition to performing routine gynaecological surgeries. She promotes “uterus saving” medical methods of treatment whenever feasible.  Strict adherence to guidelines has led to the reduction in hysterectomy rates.  She also performs laparoscopic and hysteroscopic surgeries.

Despite her extremely busy professional schedule she continues to devote time to teaching junior doctors and nurses and runs workshops on dealing with medical emergencies, communication skills, professional etiquette and bedside manners and the ethical practice of medicine.

Shetrains post-graduate students for the MRCOG exams.  She has a special interest in organizing medical Seminars and Lectures, as a part of her commitment to the Continuation of Medical Education.  Being a very popular speaker she regularly delivers lectures and participates in workshops locally and nationally. She is regularly invited to deliver lectures at various women’s organizations including the Rotary Club.

She has several publications to her name and has authored chapters in ObGyn textbooks.

In her spare time she travels, treks, reads and attends dramas and music concerts.

She is a multifaceted personality and loves to travel, trek, read and attend dramas and music concerts.  Apart from this she writes medical articles for newspapers and magazines.