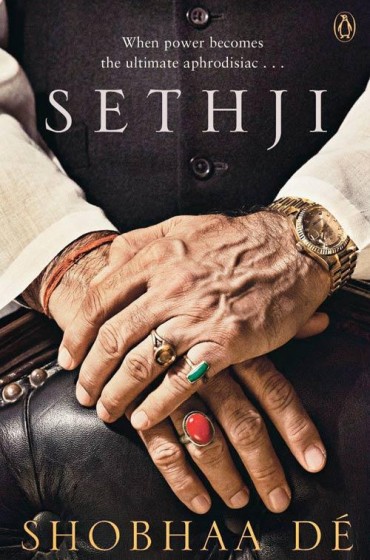 Nalanda Tambe
Freelance Journalist
Nalanda Tambe is interested in Research based on Gender and Media and field of interest is violence against women. Her hobbies are writing, reading and she is a music lover.

When god gives life to live, he gives love, sorrows, feelings, emotions. But when man’s all such god gifts are backed by the term called POWER, then everything seems zero against it. Shobha De, one of the prominent writers of today’s age, is now again into focus with her new novel “Sethji”. She has shown marvellously that how dirty politics is! How dirty the political world is! How people use and play with each other for their own selfish concerns. As the book says, exposing the dark, venal heart of Indian politics, Sethji is an absolutely unputdownable novel about ambition, greed—and above all trust. The novel was released this year and is published by penguin books India. It’s a pure fiction that portrays the upshot of power over feelings.

The story is all about a family well-settled in Delhi. Sethji is the head of the ABSP (Azaad Bharat Socialist party), a politician and a crucial coalition partner in the government. He is a shrewd and ruthless person, Strong enough to be destroyed by any tricks of life. Feelings, emotions were there, but he managed to go ahead with strong-heartedly. Moral codes and values were like alien to him. The only one who ruled him was his own daughter-in-law, Amrita. She is the only; Sethji is forced to trust upon. A man camouflaged a woman. She was as strong as a man, Strong by heart, sturdy, solid and substantial enough to rule over the house of Sethji. After all she was the alone female in the male-dominated house. She knew each and every key to each member of her family.

Amrita was the wife of sethji’s elder son Shrichand, who was just good for nothing, a non-reproductive rather. Opposite is his younger brother, sethji’s second son, Suraj. He lived a luxurious life in his father’s house without actually contributing anything in house but ironically, indebted many things on sethji’s head. The story started with his, raping a pahadi girl. She was not dead and so when Amrita and Sethji comes to know about all this stuffs of Suraj, they arrange a way out of the dirt for him and ask him to go out of the country for some days to avoid the situation.

The situation was horrible as per Amrita but Sethji takes it very blithely calling that girl a whore and transforming all the allegations on her that she must have aroused his son. The matter was settled and was not focused. But the focus was altogether on Sethji’s political career and party. How would he survive in such a status quo, was indeed a big question then. However, Amrita was smart enough to handle media and press tactfully. As a result, the matter was closed within no time and she proved right on Sethji’s expectations, as usual. This is how the sharp-minded woman was a woman of his life. The relationship with her husband Shrichand was not a fruitful one. But, her relation with Sethji, may it be by force or something else, was something more than a father-in-law and daughter-in-law relation. The physical relation between them was no more a secret issue. He never respected her, but again was not able to live without her.

“As women, our bodies are our sole wealth. A woman who understands the value of her body and trades it wisely is the one who succeeds. If she uses that knowledge shrewdly, she can even control the world. Such is the power we possess.” These were the words of her mother, an awful and ugly “truth” for a mother to be sharing with a young, inexperienced daughter. Why then Amrita to be blamed? If the learning is such, then obviously the outcome would be accordingly. Amrita was not a whore, but yes, everyone did make her one and used her. Ironically, she had no physical relation with her own husband. This was a hard fact of her life.

Their life took a sharp turn when all the three, Sethji, Amrita and Shrichand were kidnapped and taken to Mumbai. There they face a lot of struggles but didn’t let go the situation. They escaped, hided and killed the person (bhau), who kidnapped them. And all this horrifying situations were handled by Amrita. But in all this, Sethji had to lose his own heirs, Shrichand and Suraj. Finally with the helping hand of Amrita’s first love, RK, they escaped from Mumbai and reached back Delhi. Sethji, the wily old politician had to fight the deadliest battle of his life—a battle in which he staked everything. Finally, their family contained only two persons, Sethji and Amrita. Both were of a kind, alike, possessed same qualities and ziddi also. And on top of that, both of them needed each other, this time more than physically.

The story has an ability to keep a hold on readers, especially towards its last closure or nearing to its closure. It may seem that the author has insanely written the book. But, it is the hard reality of life, seen from a different angle. All such things on date also prevail in some place of our country, where power and politics means the only world for some of them. Amrita’s character has been revealed very superbly. The best part in the story is in the end when she sums up and evaluates her own life and takes a decision to stay as a bahu of Sethji. Not because, she would get all the property of his after his death, but because he was the only one who offered her to build up her own identity, character, individuality in the society. Sethji asked her to be a candidate of his party and fight for her position. Maybe that position, that identity, meant everything then, in her life. She lived for everyone in her life. Now, she lived for her own.

It is a must read novel. At least once it should be read to taste the hard facts of life. The first part may seem lack lustre and monotonous but gradually it would catch the eyeballs.

Fight For Rights – Can A Woman Do Agni Sanskar?

Who Leads A Better Life – Housewife Or Working Woman?

We Support… Let’s Together Support