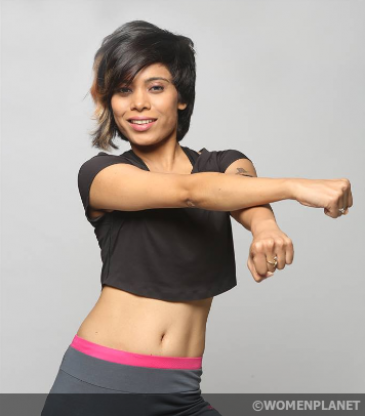 Sucheta Pal is an international Zumba Education Specialist and the selected few Master Trainers for Zumba in the world. She is currently the leading Zumba specialist in India after undergoing her fitness training from the United States.

She is a licensed trainer for Zumba, Zumba Kids, Aqua Zumba, Zumba Gold, Zumba Sentao, Zumba Toning and Zumba Step and is the only Indian to be famously featured as a Dancer Avatar on Zumba° Rush Game on XBOX for Kinect.

Sucheta Pal is also a trainer for celebrity fitness program PiIoxing and a Masala Bhangra Workout’ Ambassador. In addition she holds a Bachelors degree in Electrical and Electronics Engineering having worked in the IT industry for five years before changing career paths.

She has been conducting official trainings, workshops, master classes in US, Europe, Middle East and South East Asia and now brings her energy, enthusiasm and experience to India.

2. Awarded the Pioneer Award by the CEO of Zumba® Fitness Alberto Perlman in 2013.

4. International presenter at the Annual Zumba® Instructors Convention 2014 in Florida.

5. Co-presenter for Zumba® at the Asia Fitness Convention 2013.

Want to know more about her? Visit her website www.zumbafitnesswithsucheta.com

5 Fitness Tips To Be The Perfect Looking Bride!

Skip Not – 10 Exercises You Can Do In A Hotel And Stay Fit!

10 Facts About Zumba, We Bet You Didn’t Know!