> Exclusive > My Voice > Geeta Kumari: A girl who stood straight against all adversities

Geeta Kumari: A girl who stood straight against all adversities

Geeta Kumari, a girl who lived in a small town Chulli in the Sihori district of Rajasthan used to go 6-kilo meter one way to attend the only government school in their area to live her dream of studying but the school was barely maintained and had a severe lack of good teachers, there was no teacher to teach Mathematics subject since last two years in that government school so Geeta just like her classmates used to learn the subjects from books at home, trying to understand different concept all by herself but due to improper teaching and lack of guidance and time she could not pass the subject in Boards exam of 2013. 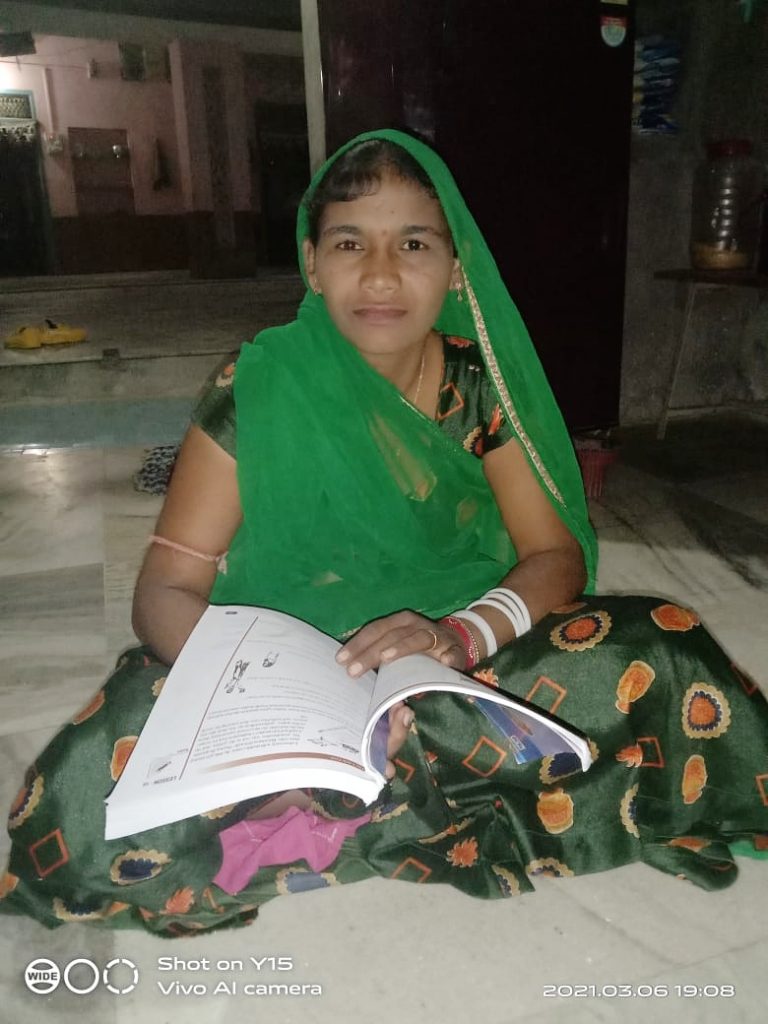 This incident took her already tough life down the hill, her parents were already not happy when she was traveling 6 Km to go to school and another 6 Km to return from school. And now with a single failure-that lack of few marks to qualify boards, they stopped her education claiming she had enough. Her family and society broke her confidence in herself. She started to believe that she might not be good enough to study and started helping her mother in household work and handling the family’s grocery shop, spending most of her day at work.

At a very young age, she was married off instead of going to school she was sent to her In-Laws after marriage however at the tender age of eighteen she accepted her destiny and tried to take it positively to turn her world around. In 2016 she was married in a village Dayalpur in Jalore district of Rajasthan in the hope of a new beginning but destiny had something else for her in the store. Right after few months of marriage, she gave birth to a beautiful child, and then after two years she gave birth to another child and she decided to provide her children with everything she could not have and shower all the love, care, and luxury she could offer. The bad luck followed her through and just when she thought of having a life she could look up to her husband died of blood cancer in 2020 just two years after the death of Geeta’s mother-in-law. Her husband has already lost his father long ago so now she was left with no one in her family on her husband’s side except one younger brother of her husband who stays 450 Km away in Rajkot, Gujarat with his family. With no bread earner left in the family, Geeta took the charge. She was all alone to raise two kids who are 3 years and 1 year young. Juggling hard to get an opportunity to earn livelihood in a small place like Dayalpur on her own, raising two children, and managing the entire household single-handedly she decided to seek help.

She went to her maternal home and started helping her parents with their grocery store to get some money but this was a temporary solution and Geeta knew it very well to raise children is not an easy task and to bear their expenses she has to find a stable well-paying job but her 10th-fail qualification hindered her always and thus she decided to re-appear. One of her friends was in Pratham and suggested her name for the Second Chance Program and Geeta was selected from Dayalpur center of Pratham now she has a ray of light to cling to, she will be taking the boards examination again in April 2021.

Failing once has planted a lasting fear in Geeta’s mind, even after eight years of the gap she is now frightened to appear again for the same Mathematics exam she could not cope with last time and had to leave her studies and was made to stay home doing daily chores instead. Living again with her four brothers and mother and father in a small house in Chulli she wants to get out of this misery and hardship and be self-sufficient.

Geeta is working day and night leaning to qualify the Boards to get some good-paying government jobs at the end that could pay her enough to take care of her toddlers and her family.