With some of the most acclaimed public artworks on display and a bi-annual art show that selects a new piece each year to be showcased on city grounds, Beverly Hills is the destination for art lovers. To enrich the cultural lives of its residents and visitors, the city continually collects a wealth of world-class art by way of the Fine Arts Commission. Members travel the world to purchase art that they feel would be an ideal fit for the city, and a Public Art Ordinance is mandated by the city, requiring developers to either purchase a piece of art for their property or donate to the Fine Art Fund.

All works of art must meet the following criteria: created by an established artist with an international reputation, possess an intrinsic quality that enhances the aesthetics of the building site and create visual excitement for the city. If the criteria are met, members of the city’s Fine Art Commission approve the piece, which is then brought to the Beverly Hills City Council for a vote and a site is chosen. Since 2015, over 70 pieces of art have been selected and adorn the city landscape. Below is our list of the top places to visit to see public art in Beverly Hills.

Take a stroll through Beverly Gardens Park and you’ll quickly find yourself running into an impressive collection of public works of art. Start east of the Beverly Hills Sign & Lily Pond to view Roxy Paine’s Erratic, a texturized stainless steel boulder that symbolizes technology’s impact on nature or Playground, the first Tony Smith piece commissioned by a city. Head west down the park’s jogging trail to view Barry Flanagan’s The Drummer, a whimsical bronze hare located in front of the Beverly Hills Sign and Lily Pond, Yayoi Kusama’s eye-catching Hymn of Life: Tulips and Takeaway by Tom Friedman, a 14-foot tall stainless steel sculpture of a man with takeaway boxes balanced on his head. Also on view along the park are Magdalena Abakanowicz’s Sitting Figure on Bench, Henri Alfred Marie Jacquemart’s Hunter and Hounds and Jaume Plensa’s Endless V. 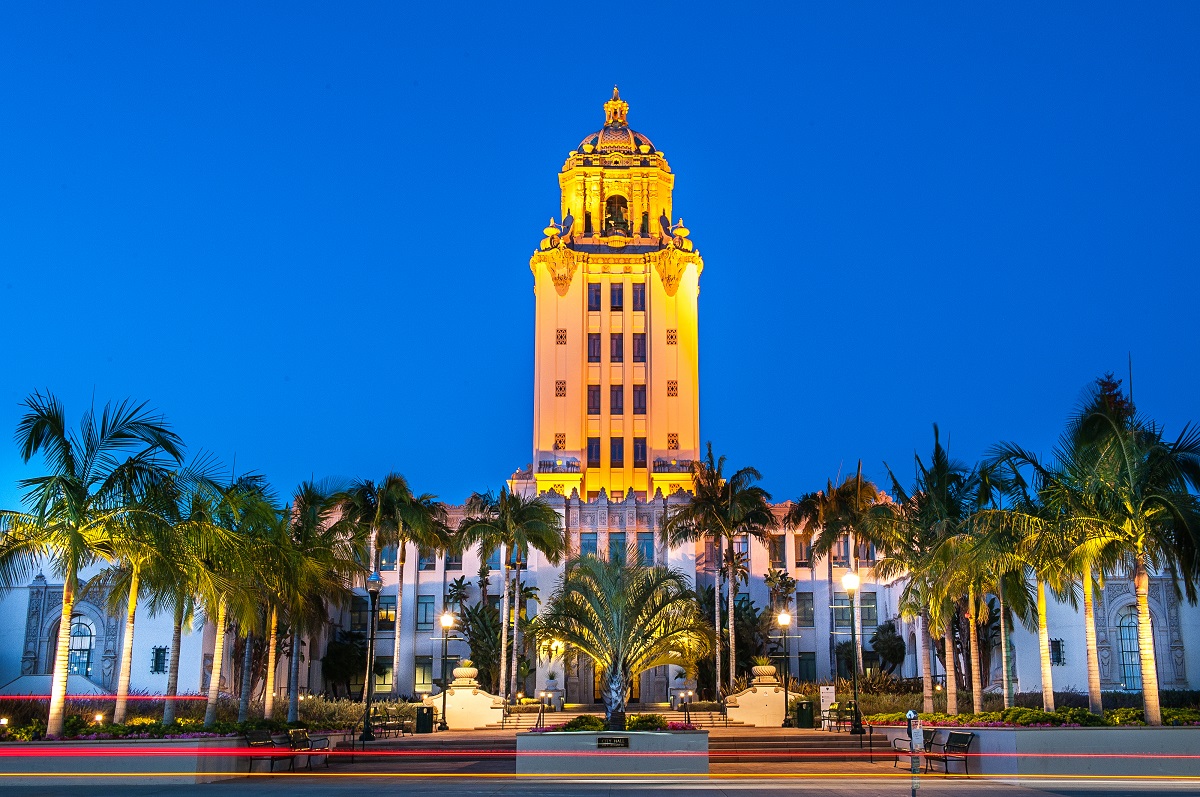 Presiding over the city’s civic life since 1932, Beverly Hills City Hall has been a beloved local landmark designed by architect William Gage. Beautiful in pictures but even more stunning in person, explore the center’s terrazzo floors and intricate ceilings as you view several public works, including Joan Brown’s The Obelisk, a mosaic tower depicting a seagull in flight above green palm trees, Charles Arnoldi’s Home, located south of the Beverly Hills Public Library and Richard Serra’s triangular sheets of steel, Twins, created in dedication to the artist’s twin nephews.

Carefully make your way to the Burton Way grass median and you will instantly spot Sisyphus, a bright red modern steel sculpture by Alexander Liberman, a gift donated by the husband of the city’s former mayor, Vicki Reynolds. A few yards east of Sisyphus is William Kentridge’s World on its Hind Legs, the only major outdoor sculpture by Kentridge in the U.S. The three-dimensional work is meant to be observed from all directions, providing viewers “moments of dynamic abstraction and moments that appear to be almost two-dimensional,” as stated in an article by Beverly Press. Next, head to Rexford Park, where you will find Baile Oakes’ Spiral of Life gracing the lawn.

Set between Santa Monica Boulevard, Canon Drive and Wilshire Boulevard is The Golden Triangle, a grid of seven smaller commercial streets that encompass the business district of Beverly Hills. Catch a perfect photo opportunity with one of the the sculptures by street artist Mr. Brainwash. His sculpture, Beverly Hills is Beautiful, located in Beverly Canon Gardens just outside Montage Beverly Hills, is an extension of of his piece, Life is Beautiful, located on Rodeo Drive, that debuted in 2008 on Sunset Boulevard.

Down Beverly Drive, viewers can admire Unconscious by Franz West, located at the “Gateway” of Beverly Hills at the corner of Wilshire Boulevard and Beverly Drive. The orange looping ribbon-shaped sculpture integrates three seats to encourage conversation, socialization and interaction. 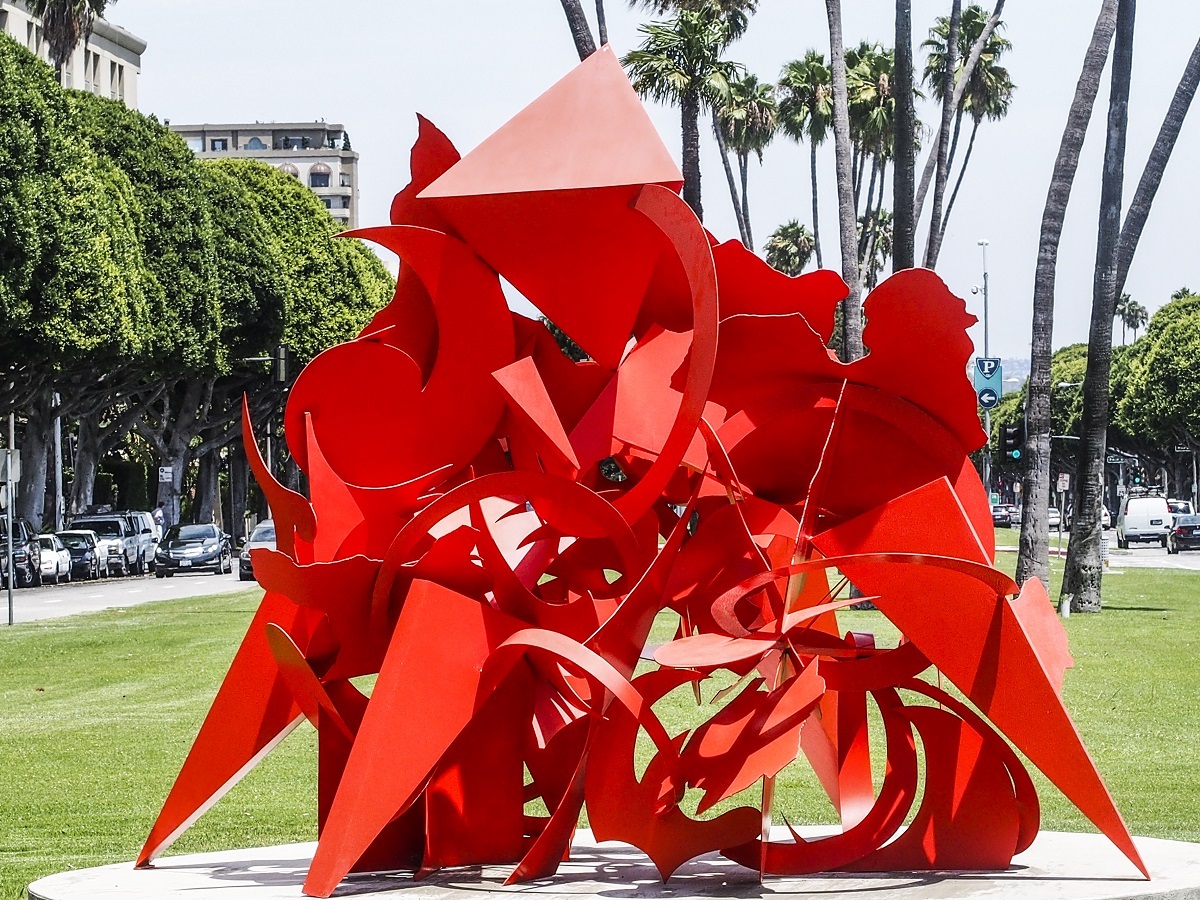 In addition to purchases through the Fine Art Commission, Beverly Hills acquires new art every spring by awarding The Mayor’s Choice Award during the bi-annual Beverly Hills artSHOW. Established to affirm the city’s commitment to and support of the arts, the Mayor awards a winning piece to be installed at a public city facility. The artwork is chosen amongst the works of over 240 international and domestic artists who showcase and sell their creations during the art show in Beverly Gardens Park, an event that attracts as many as 50,000 attendees. Winners from recent years include Flight of Spring by Steve Leclair, located in the Municipal Gallery at City Hall, Ball & Jacks by David Tanych, which can be spotted at the Beverly Hills Community Dog Park on Foothill Road and Alden Drive and Affirmation by Greg Clark, which hangs in the lobby at the Roxbury Community Center.

Life Planning Guide: – How to Plan for Medical Emergencies

Experiment with 5 Styles in Round Glasses for Women