> Exclusive > My Voice > Zeba Kosar: A girl who is stitching her dream back 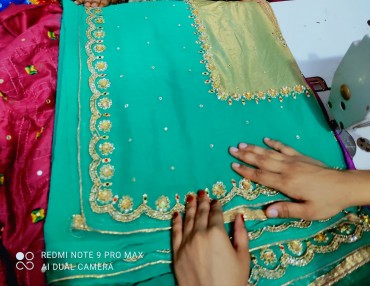 Zeba Kosar: A girl who is stitching her dream back

Saluting the perseverance that time could not defeat, twenty-five-year-old Zeba Kosar’s dream to study did not bend its knees not even after a seven years gap. This story is about a girl, living in the small town of Eidgaah in Jaipur, Rajasthan. Growing up in a two-room house with an entire family of nine members she was quite distorted with tragic realities, where they use one room as a bedroom and kitchen and another as their work place with tailoring machines set up and clothes stacked in high hips.

Zeba, since childhood, has managed to work along with her studies, and when she had to appear for board exams in 2014, she fought very hard to manage academics and work but ended up not getting enough marks in tenth board in three subjects and that broke her confidence and snatched her opportunity to study further as she, one of the seven sisters, could not afford to repeat the year along with her tailoring work. She had to join her mother in the tailoring work, stitching laces to Sarees and Dupattas to feed her family and provide for the education of her 3 younger sisters. So there she was helping her mother in stitching other’s dream pair of dupattas and sarees and meanwhile her dream was ruffled into a nest.

Zeba’s survival was hard from the time when her three elder sisters, mother, and father all were working but then two of her sisters got married and shifted to a nearby village and thereafter two years ago her father got paralyzed so the number of feet remained the same but those working lessened and their condition worsened, with the same number of mouths to feed with reduced income and added responsibilities left them broke and helpless.

At the age of nineteen, back then, she had to step up as the provider of the family so she was never been able to cherish the little childhood joy while growing up with financial difficulties and adding to that her father’s bad health burdened them physically too, her father required 24×7 nursing, he has to be assisted for performing even basic human tasks such as going to washroom, bathing, clothing, and eating. He would want support for any mobility ever so small. she could not let herself waste time in anything except work, anything that does not aid financially or helps her taking loads of work from her shoulders.

Just as every girl dream, she too dreamt of marrying in a proper household and to loving husband but a few months back her sister married a man who abandoned her sister after just three months of marriage saying if she can not give him a child she is of no use to him and the man married another woman even before the two of them hasn’t divorced yet and Zeba’s trust in fairytale afterward too was wounded. She still hopes to find a better half as her family wants her to get married someday but she is distressed about leaving her family on their own without help as her life revolves around helping her family.

Mother and daughter work for the whole day to stitch laces on cloth pieces for which they earn three to four rupees each; even after working ten to twelve hours a day they could finish off twenty-five to thirty sarees and dupattas and their total monthly income could barely reach three thousand rupees, the sum not enough to feed such a huge family and pay for her father’s medical bills. Her younger sisters who are 10 to 15 years younger stay home after school nursing their father and forced to look out for daily chores at such a young age.

The family was desperately looking for help but could never find from where they could receive any help, the government have formulated many schemes and funds to help such economically weak and needy sections yet the family was not aware of the criteria they needed to fulfill or on which platform they could reach out to. They tried reaching government offices day after day for a long time only to get disappointment, every person they meet asks for different things some money and some directly said they do not fit the criteria the government has set.

Pratham in its yearly survey of finding drop-out girls provided Zeba an opportunity to resume her studies under the ‘Second Chance Program’, with the financial aid from Pratham and guidance from Bhagyashree Saini via the online hourly evening classes Zeba will appear again for the Boards exam this year in April 2021. After the financial aid received question for her was to make time for studies and manage academics as well and thus she started to attend 10 AM to 4 PM schooling, the teachers gave her enough flexibility and understood her position well. After school, she gets back to her tailoring work for the rest of the day from late afternoon till night. She tries to study and revise in between the work and at times late nights to make sure she copes up with the rest of the students.

She dreams to become a lawyer as she has seen people not knowing their rights and the people who don’t know how to and whom to fight for their rights. But more than that she wants to support her younger sister by providing her proper education and make her sister a doctor. She wants to make sure none of her siblings’ have to leave their studies like she had to, unfortunately.

The girls like Zeba who stitch their dream back just like those laces on Sarees are the real stars, the ones left unsung by our society.