> Health > Being Me > Causes and Risks of Idiopathic Pulmonary Fibrosis 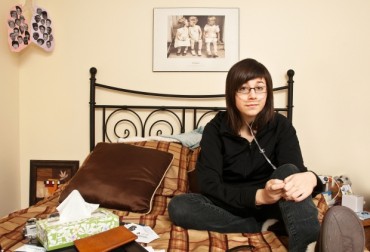 IPF that is an abbreviation for Idiopathic pulmonary fibrosis is a certain kind of lung disease wherein scarring of the lungs occurs for unknown reasons. As the disease progresses the scarring tends to get worse and it can become hard to even take a breath and therefore the lungs cannot suck in enough oxygen.

This is a kind of interstitial lung disease that involves the space which surrounds the air sacs and the tissue of the lungs. It does not directly affect either the blood vessels or the airways. It is important to note that there are various kinds of interstitial lung diseases that can also lead to fibrosis or inflammation but need to be treated differently. It is therefore important to understand if you do suffer from Idiopathic Pulmonary Fibrosis so as to get the right treatment. Read on for more information as well as our tracking app which tracks the symptoms of this health condition.

Unlike many other health conditions, it can be hard to maintain a symptom tracker for Idiopathic pulmonary fibrosis. The symptoms of this health ailment tend to develop over time. Many patients may not suffer from any major symptoms until the disease has caused considerable damage to the lungs. Once lung damage begins, and symptoms begin to appear, they are likely to get worse as the disease progresses.

Some of the most common signs that are recorded by symptom tracker include:

Shortness of breath is one of the main symptoms of Idiopathic Pulmonary Fibrosis. Most patients who follow symptom tracker will report shortness of breath only while exercising at the beginning. However, over time they begin to feel restless as well as breathless even while resting

A hacking dry cough that doesn’t abate is yet another significant sign on symptom tracker. As the disease progresses, the bouts of cough will only get more intense and become hard to control

Other signs and symptoms that you must watch out for include:

The main cause of Idiopathic Pulmonary Fibrosis is still a mystery and not completely understood. Despite a lot of research, no one still knows clearly what causes this disease and why some people contract it. The word ‘Idiopathic’ itself means – of an unknown cause. That said, there are a few common factors of this disease worth enlisting. These include:

Family History or Genetics – Up to twenty percent of patients who suffer from Idiopathic Pulmonary Fibrosis is likely to have a family member who suffers from either Idiopathic Pulmonary Fibrosis or some form of interstitial lung disease. In the event that more than one person in your immediate family suffers from this condition, the disease is referred to as familial pulmonary fibrosis.

Smoking – According to doctors at least 75 percent of patients who suffer from Idiopathic Pulmonary Fibrosis are either current or former cigarette smokers. Based on the symptom tracker, these patients suffer from not just fatigue but also disturbed sleep, which is one of the signs and symptoms of the disease.

Acid reflux – It is also interesting to note that about 75 percent of patients with Idiopathic Pulmonary Fibrosis is reported to also suffer from GERD and complain of symptoms such as heartburn often.

Age – As per studies and polls, a person above the age of 50 are at a higher risk of contracting Idiopathic Pulmonary Fibrosis.

Idiopathic Pulmonary Fibrosis is a chronic disease that progresses with time. Since doctors and researchers are yet to unravel the causes of this disease, there are a number of misconceptions about this disease including prognosis as well as life expectancy. In order to debunk a lot of the myths regarding this disease, we have put together a list of important factors you must know.

The prognosis of a patient with Idiopathic Pulmonary Fibrosis will vary from one person to another, depending on their overall health, age, lifestyle choices, and also the severity of the condition during diagnosis.

There are 4 different stages of Idiopathic Pulmonary Fibrosis namely

PF can also be caused due to Exposures, meaning that it can be caused due to exposure to hazardous materials. The most common examples include occupational exposures like asbestos or silica. Breathing in the droppings of animals and birds too are some cases related to PF. Also, smoking increases the chance for a person to develop PF.

Idiopathic Pulmonary Fibrosis rehabilitation helps you to manage your symptoms and also improve your daily functioning. Here are the 4 aims that this program focuses on:

You can also try some physical exercises that may improve your endurance.

Some breathing hacks that improve your lung functioning.

Most Idiopathic Pulmonary Fibrosis patients are recommended to undergo rehabilitation wherein they get to learn more about the disease they suffer from, the various treatment options available and several breathing techniques that can help them breathe better. These kinds of programs help patients with a symptom tracker that indicates fatigue and excessive tiredness and teaches beneficial exercises that helps manage the condition of the patients better. PF is a serious disease that should be treated at the earliest. If you participate in a group of people having the same disease, it can be really very helpful for you as they had similar symptoms and treatments.