For mothers, multitasking is a natural aspect. Especially in today’s day and age, the art of managing career and home is considered an achievement. But often in this process, many women forget to pave a path for themselves. Sticking by the rules of earning money and setting up their home, so many tend to rely on monotonous regimes of life. But for Kiran Dembla, celebrity Fitness Trainer, DJ, Photographer, Mountaineer, the way to success was full of risks she wasn’t scared to face.

“I tend to look for newness. After being successful in one venture, you need to work for another. That’s how I keep myself motivated,” says Kiran. She hails from Bulandshahr in Uttar Pradesh. A simple house, with one sister and two brothers, Kiran’s outlook on life was limited to the one she was exposed to. “We didn’t go to fancy schools or live in a big house, our needs were limited.”

Till today, a vast majority of society believes that women should get married, have kids and live off their partner’s income. Kiran was living the same life post-marriage. “We didn’t think so big. There was no direction for me to follow as such. I was a homemaker and my reality was that my husband would earn for us to sustain. I didn’t know about jobs, gyms or anything outside my house.”

But once exposed to the outside world, things started to change for her. With short stints in Bangalore, Japan and some European countries, Kiran and her husband, Ajit Dembla, moved to Hyderabad (now Telangana). “When I became a mother of two, I had no time for myself. The hair bun I used to make in the morning would stay on till night, it was that crazy. I hardly looked in the mirror, so much so that I had forgotten what I looked like!”

When Kiran was diagnosed with a blood clot, it made her reevaluate her life choices. She reiterates that her dependency on her spouse for even signing a cheque made her overthink beyond measure. And this would often result in bad headaches. On her husband’s advice, Kiran took up teaching music, an art she was trained in for 24 years. 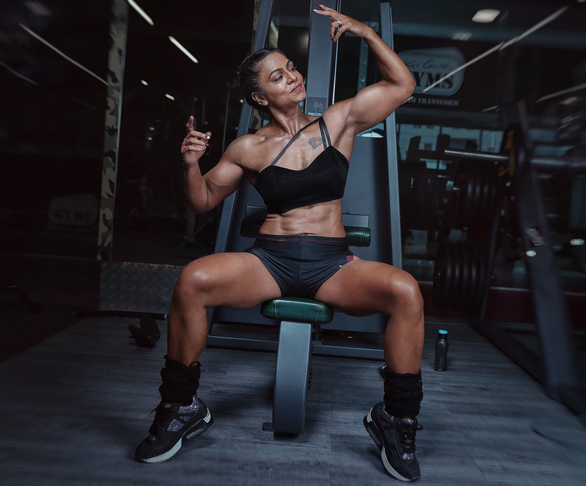 “It was during my treatment that I started teaching children music. Due to the medicines I was prescribed and the added responsibility of taking care of my own kids, I used to be sleepy while taking classes. So, I stopped after two years,” says Kiran.

In order to channelise her energies in the right direction, Kiran decided to take up swimming. With a difficult beginning due to constant headaches underwater, she was determined to stay on and learn the water sport. “This was the much needed kick in my life,” she says.

And then there was no looking back. Kiran joined the gym. To manage time with homebound responsibilities, she used to wake up at 4.30 am every morning to be back by 6 am to feed her infant. It was during this time that Kiran lost 24 kilograms in a matter of six months.

“I was so addicted to gymming that I went on to complete an American Muscles and Personal Trainer course. I used to find bodybuilders weird! And had an opinion that women look manly and shouldn’t get into bodybuilding,” says Kiran.

The passion of fitness training by now had got to Kiran so much that she opened three of the biggest gyms in Telangana. But the age old male dominance in such an industry annoyed her, “once a male trainer told me that women trainers are useless and no celebrity wants to be trained by them. Bodybuilding is not an option for them either!”

This was enough spark for Kiran to change mindsets. She trained Ram Charan and later his wife, Upasana. “After this, my luck changed. But it also happened because I utilised the opportunity I got. I trained so many South celebrities like Rajmouli, Taapsee, Tamanna, Prakash Raj, Anoushka Shetty, the list goes on!” says Kiran with a proud smile on her face.

However, to stick with routine was not Kiran’s slice of cake. She wanted to get a six-pack, a task extremely difficult for women who have gone through childbirth. “As a homemaker, you have two options. Either to stay in the confines of your home or get out and outdo yourself in whatever field you choose. Because the first one is a vicious cycle of responsibilities and being stuck in the daily rut. And I didn’t want that.”

To motivate herself, Kiran used to imagine herself in a bikini every morning. She says this made her realise how far her body was from being ideal. “After you see fat oozing out of all your body parts, ask yourself if that is really you,” a tip she says useful for other women, especially for mothers.

A gallery of her six-pack photoshoot was then inaugurated by Rajmouli and Anoushka. This was enough for the media to get Kiran under their radar and give her the boost she needed. This was a big turning point in her life. For she decided to go for bodybuilding next.

After tedious months of tackling family issues that needed her attention and her own focus on going for the World Bodybuilding Championship held in Berlin that year, Kiran went on to take the 6th place. “I felt like how mothers feel after childbirth. 9 months of labour and then finally empty!”

One challenge led to another, and Kiran has till now managed to train herself professionally in all the fields she experimented with. Be it mountaineering (she touched the mt. Everest base several times), DJ-ing or Photography, she has outdone her. But, to pursue an active colourful career like hers requires the support of a partner, which she found in Ajit. “We have struggled to keep everything together. It was a lot of work, but it was worth it.”

A typical day for Kiran is spending time with her family, heading her photography team, training prospective DJs, providing guidance to online fitness classes, checking social media and the emails she receives followed by a gym session before retiring for the night.

Kiran would like to tell mothers, young girls in the fitness industry to look up to themselves before anyone else, a tactic that helped her move forward, “I am my own inspiration. Yes, I do look up to others, but for me to get inspired by my own story is more important to push myself forward.”